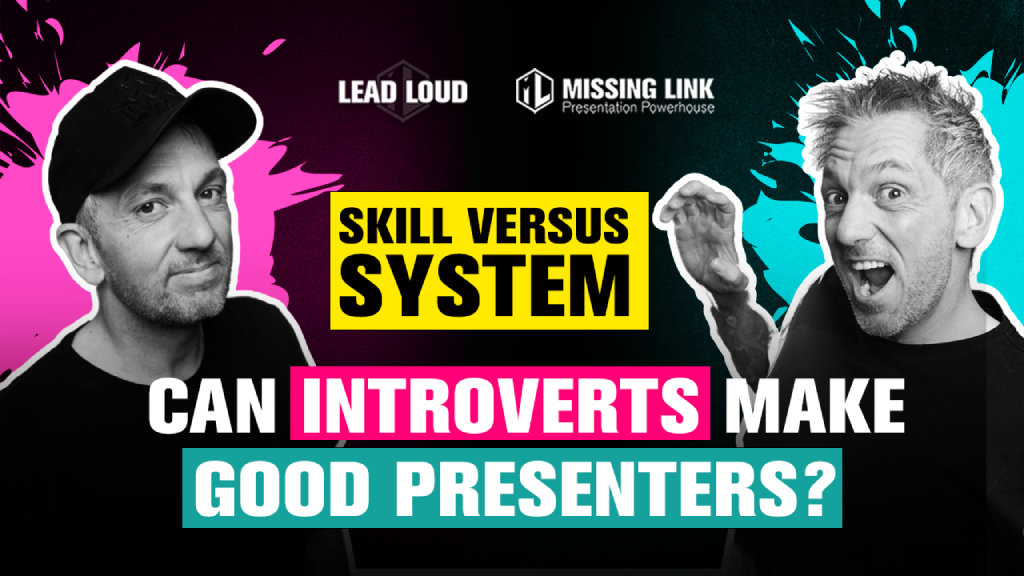 One of the most common misconceptions I see when it comes to public speaking is that it is a discipline best performed by extroverts. In the more than a quarter century I have owned Missing Link I found this just not to be the case at all.

In fact, I’d go as far as to say that introverts make better presenters.

Why? Because they are a whole lot more teachable than extroverts.

I myself have been a professional speaker for 20 years. I have spoken to audiences all over the world, to audiences as small as can fit in a boardroom, to 5000 people in a convention center (the small rooms are way harder – fact) – and I am the most introverted person that I know.

Despite this, I love speaking on a stage, as mentioned the bigger the better! It’s so fun, nobody speaks back 🙂

And I’m not alone, speakers, presenters and performers from Bill Gates, to Barak Obama, Emma Thompson to Christina Aguilera, Nelson Mandela to Tim Urban (one of my all-time fave TED talks) are all introverts like me, that are very comfortable on stage.

That’s what I cover in this video:

A small amount of skill with a healthy dose of structure is all you need to deliver a great presentation, if you want us to help you with that, then certainly reach out to the team here. And if you want to just DIY it, no problem, we got you covered there too, here is everything you need to know to structure your next killer presentation.

Don’t listen to this story that you have sold; being an introvert is a feature, not a bug. Don’t take my word for it though, watch Susan Cain’s fantastic TED talk:

Learn 25+ years of sales techniques directly from the mind of Rich when you undertake the StorySeller program.

We teach you how to uncover your value proposition and sell it successfully through the power of narrative.

LEARN MORE
Menu
We use cookies on our website to give you the most relevant experience by remembering your preferences and repeat visits. By clicking “Accept All”, you consent to the use of ALL the cookies. However, you may visit "Cookie Settings" to provide a controlled consent.
Cookie SettingsAccept All
Manage consent